ARM is excited to announce that Bill Spenceley (Flexahopper Plastics) and Reijo Strom (Motoral Oy) have been elected to the Rotational Molding Hall of Fame. They will be inducted on October 23 at the ARM Annual Meeting in Montreal.

In 1974 Bill Spenceley rotomolded his first part as a summer employee at Flexahopper Plastics in Lethbridge, Canada, where he is now the Owner and President. Since attending his first ARM meeting, he has regularly shared with our industry as a committee member, a speaker, and a Chair of ARM Meetings. For this work he was a recipient of the Charles D. Frederick Distinguished Service Award in 2014. His enthusiasm for maintaining strong bonds between the international rotomolding community was evident during his time serving as the Chairman of the international Affiliation of Rotational Molding Organizations and as the President of ARM. Bill regularly speaks to rotomolders around the world about ways to improve environmental sustainability. At Flexahopper Plastics he installed the biggest solar energy system in the rotomolding industry worldwide. He has supported research and development projects through work at Flexahopper and with his strong financial support of the Roy Crawford Rotomolding Education and Development Foundation.

Reijo Strom has operated Motoral Oy, his rotomolding company outside Helsinki, for more than thirty years. During that time he has been active with ARM in North America and Nordic ARM in Scandinavia. He served twice on the ARM Board of Directors in the 1990s, on the International and Membership committees, and as a presenter of workshops and general sessions at ARM events. He sponsored annual ARM Nordic events across Scandinavia and hosted annual tours of his facilities by design students from four Finnish Universities to help promote the industry. He has helped develop innovative parts for the agricultural OEM industry serving both European and international markets as well as many products for his local Scandinavian market. Motoral Oy have won Product of the year twice in 2003 and 2009 and were instrumental in developing the cast silicone technology used for producing open holes in rotomolded parts, now known as Maus Holes. 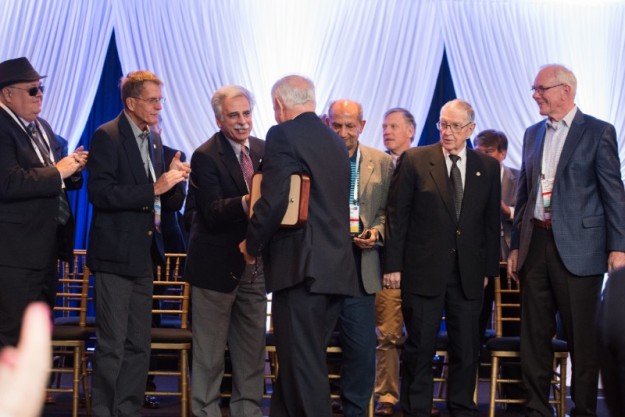 Register to attend the Annual Meeting.

Congratulate our inductees and share stories of working with or learning from them in the comments. (“Leave a Reply” link above.)